We are currently en route on a train from York to Edinburgh, where we will stay until Friday when we fly to Paris. It is quite chilly (even by Seattle standards) in these parts, with daytime highs in the low to mid 60’s in York and about to plunge about 5 degrees (F) further in Edinburgh.

York left quite an impression on us.  Although it is a relatively small town (45,000 inhabitants), nothing about it feels small at all – from its rich history to the wide variety of restaurants to the seemingly endless turns on cobblestone streets, always with the impressive cathedral, York Minster, in the backdrop. 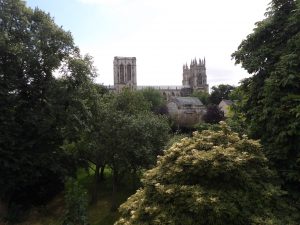 York Minster from the wall

We stayed in a great Airbnb in a very bucolic setting outside of York, a peaceful 15-minute walk from the city center, with the main decision to get into town being which route we wanted to walk – by the river or through the gardens.  In the picture below you can make out a couple of spires from York Minster, proving that no matter where you are in York you can always see the Minster! 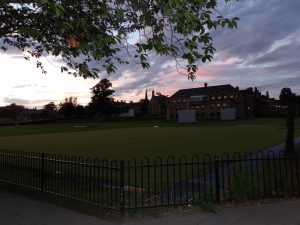 Sunset on the way home (York Minster in background)

As with London, one of the first orders of daily business was to find a great place to have coffee – and find one we did! In the picture below you’ll see our coffee spot, The Perky Peacock, in a medieval building right on the river. It was a great little spot, so much so that I consumed 5 cappuccinos in 3 days, and Terra got to deal with the hyper-caffeinated aftermath. 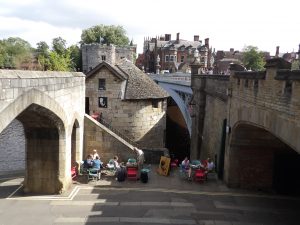 Coffee in a Castle!!!

The key to our success was really due to meeting friendly locals at the right time, who steered us to some of the most fabulous food and drink spots that you could ever imagine.  (Thanks to our York friends Paul and Claire in case you are reading this!)  These recommendations led us to such establishments as “The House of Trembling Madness” and 2 different tapas bars, “Skosh” and “Ambiente”, not to mention a number of fabulous and cozy pubs.  And for our Montana friends, there was (quite randomly) a bar and grill called, you guessed it, the “Missoula Montana Bar & Grill”.  Huh? 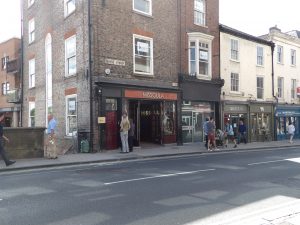 The history of York is simply fascinating, and there is no better place to experience it from within the Minster itself.  After exploring the interior we walked to the top of the tower up the 275 narrow, winding steps.  We did not pay 6 pounds for our ‘Made it to the Top’ banners (I mean…it really wasn’t that impressive), but we did manage to snap a couple of pictures. 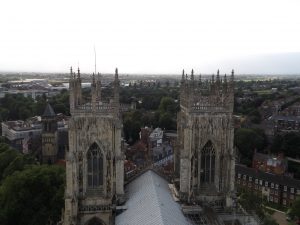 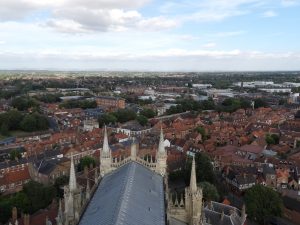 another view from the top

York Minster is the largest gothic cathedral in all of Northern England, and it is quite impressive. 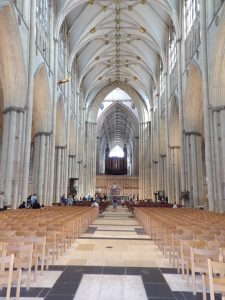 While we were there we went to an Evensong service, which included a choir singing a few hymns (mostly psalms) and is a largely unchanged daily tradition since the 1500’s. Feeling awash in history, we went down below the cathedral to a museum which peeled back the layers of time even more, including a hole through the floor which showed foundations from earlier times – which went all the way back to the Roman lodgings built on that spot in the 4th century.

For any history buffs there is a also a lot around York on the period after the Viking raids and Norman conquest (9th-11th centuries).  York is also the birthplace of Guy Fawkes, one of the leaders in the infamous and ultimately unsuccessful “Gunpowder Plot” of 1605 (“Remember, remember, the 5th of November…”).

But the best thing about York, in our estimation, was walking around on narrow, cobblestone streets, and really getting the feeling of being lost. Or walking around the town on the city walls, picturing what it would be like to guard the city.  York just has a way of transporting you back in time.  It was truly a remarkable town to visit and we are so glad we included it on our UK itinerary. 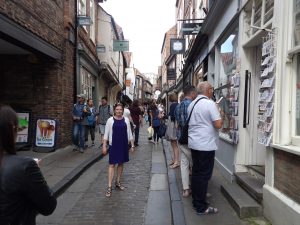