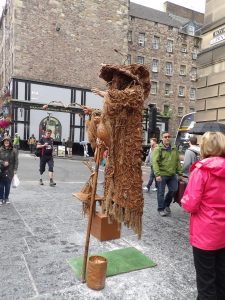 he’s floating. no, I’m not joking

I probably shouldn’t try to speak for the entirety of Scotland, but at the very least this statement is true for Edinburgh, which is where we were for three days earlier this week.

What comes to mind when you think of a festival? Maybe the annual parade that your small town puts on (if you are from my home town Hillsboro, for example, think Old Settlers). Maybe the football game day of your alma mater against the arch rival – say Montana versus Montana State or Michigan versus Michigan State.  Now I want you to remove those images entirely, because Edinburgh Fringe Festival to other festivals is kind of like the Big Bang is to the Russian asteroid from a few years back (one of my favorite John Stewart clips by the way). 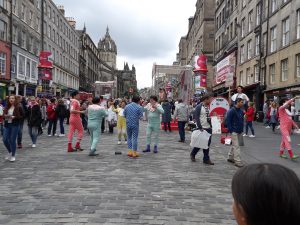 This lady below is normal at the Fringe Festival; I would have asked her for directions. 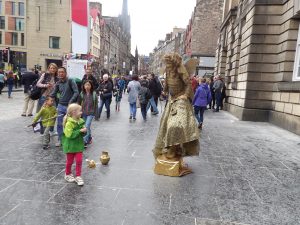 this lady is normal at Fringe Festival

Mostly, though, there are a lot of people. And shows, oh the shows. Basically every venue that could possibly be a venue – restaurants, churches, bathrooms (maybe?) – becomes a venue for a play, comedy set, you name it. True story: as a way to decompress from all of this madness we decided to go to a yoga studio that was quite a bit out of the way of the main action. The teacher told us that, 15 minutes after our class, the yoga studio was going to be transformed into a dance party as a party bus was going to drop off 60 people – so unless we wanted to be swallowed up into that we’d better high-tail it out of there.  I’m also pretty sure the comedy set we went to broke several fire hazard codes (in fact that observation was mentioned a couple of times during the routine). 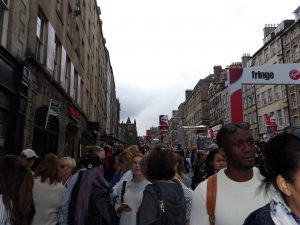 Will I or will I not be crushed?

Now, the Festival wasn’t all bad by any means.  In fact, there was great street singing and dancing everywhere. I came across the most incredible street performer/guitarist called MexFS (google him!). 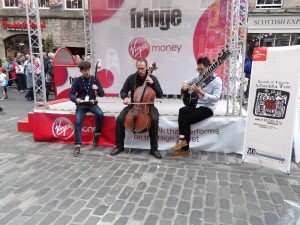 Busking at its finest 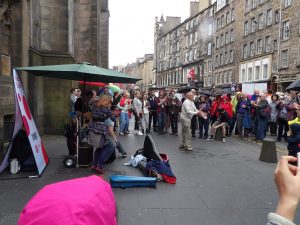 And oh, by the way, Edinburgh is one of the most astonishingly beautiful cities I have ever seen. The core of the festival took place on the Royal Mile, which is a collection of amazing buildings, sites, and museums leading up to the Edinburgh Castle, which sits gloriously over the entire city. 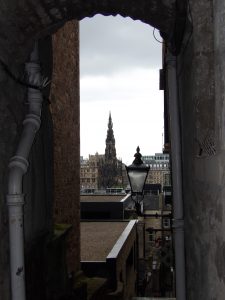 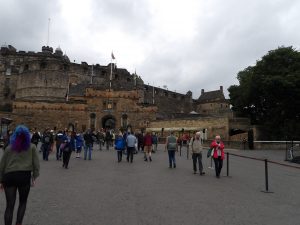 Given the festival, and the poor weather (generally raining and cold) it was just a little difficult to get the true flavor of Edinburgh. If you enjoy the sites, sounds, and energy of festivals then Edinburgh in August is an absolute bucket-list item for you.  If not, try July or September…I think that’s what we’ll do next time!