The last few days have marked an entirely new type of adventure on our trip. In this post I’ll discuss a number of unusual things from the weekend, including but not limited to 1) finding ourselves in the “Sea of Sand”, 2) encountering numerous good ‘problems’, and 3) discussing such highly technical terms as ‘whaling it’ on a regular basis. What were we doing, you ask? Bouldering at one of the (if not the) best spots in the world amidst the 20,000+ boulders in Fontainebleau Forest, just outside of Paris. 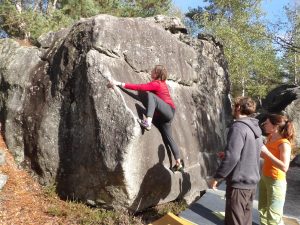 look at her go!

We wouldn’t have even known about the boulders in Fontainebleau Forest if not for a comment on Facebook by our good friend Cale, who pointed out when we visited the area in August that we were in a famous outdoor mecca. That prompted me to look online for any guided trips, and I found a British company called Rock & Sun which offered a weekend getaway that dovetailed nicely with the timing of the second French portion of our trip. The best part of their offer was the promise of English-speaking guides! We already felt a bit out of our depth; I can’t imagine if someone was barking orders at us in French.

Even still, this leg of the adventure would never have happened if not for a conversation that Terra and I had a couple of weeks ago. At the time, we were in the Alps and it was starting to get cold as Autumn took hold. We were still undecided about whether to take this trip, and I said to Terra “Are we really the couple that goes for a weekend bouldering excursion in the cold?” I let that sit for a day or so, but when my contact at Rock & Sun asked one final time if we were in or out, I replayed that comment in my mind and knew immediately that we had to sign up precisely because of my comment. This trip is all about trying new things, throwing out pre-conceived notions, and pushing ourselves to new heights (pun intended). I couldn’t imagine a better opportunity than the one set before us!

For those of you who haven’t been introduced to bouldering, it does involve climbing rocks but it is not the same as ‘rock climbing’. There are no ropes or harnesses, as the boulders are not high enough to warrant them. However, falling off the rock at certain stages of the climb or in certain ways could certainly leave you in a world of hurt, so there are a number of safety precautions like understanding good falling technique, wearing good climbing shoes, positioning climbing mats to fall on, and relying on one or two spotters to help guide your (inevitable) falls. This is not to mention a number of specific climbing techniques which I won’t even get into here that make it possible to do sometimes impossible-looking things. For example, in the image below it was critically important for Sam (who I’ll introduce below) to shift his weight in such a way to create leverage in order to proceed higher on the rock. To be honest, after a weekend of climbing we only grasped and utilized a small portion of technique. 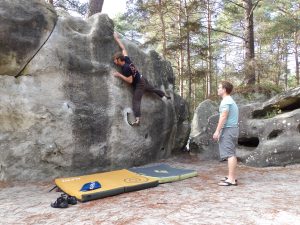 Speaking of technique, one of the easier techniques to ‘master’ is whaling it (which isn’t actually a proper technique at all). It usually involves a novice (ahem, like us) getting a bit nervous when close to the top, abandoning all proper protocol and pulling oneself up by the arms and rolling over the top of the bolder – kind of like a beached whale. It is critically important not to ‘whale it’ too much, however, as the other side of the rock could have a significant downslope (which said ‘whaler’ should have checked before climbing in the first place). 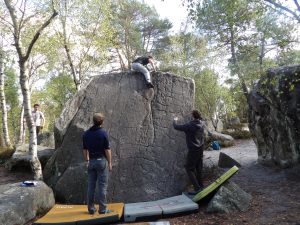 Bouldering certainly has its challenges, but there is no other sport that makes Terra and I feel more child-like. My hope is that by the end of this post you will consider adding bouldering to your fitness routine if you have access to a gym or outdoor setting, no matter your age. And now, on to the adventure…

Amber and Sam were our English-speaking fearless guides who also happen to be from the UK. The other student (on the left below) was Mathias, the third person we’ve met and become friends with from Sweden (future Joy-adventure to Sweden perhaps?).  Amber and Sam excelled in patience as I’m sure we tried and tested that throughout the weekend. It was a small, but super-fun crew! 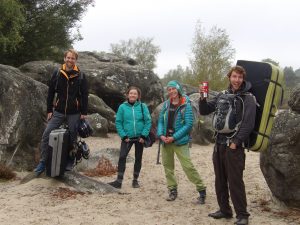 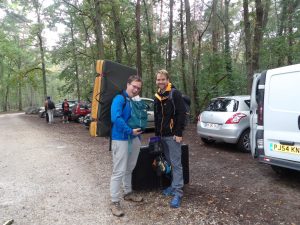 Nate sneaking a baguette with Matthias

Adventure in the Sea of Sand

Friday was a wash-out, so we ended up climbing on Saturday and Sunday. And even though it wasn’t raining on Saturday, we had to give the rock some time to ‘dry out’ on Saturday morning. Apparently the rock gets moist and sweaty and it requires some wind and/or sunshine to get dry and make for acceptable climbing conditions. Sam told us that they couldn’t climb for two weeks in the summer simply because the rock was sweaty due to a high amount of humidity! The closest thing I can equate this to is when I take a shower after hiking in the summer and the shower doesn’t take as I continue to sweat (but enough about me).

As I mentioned before, Fontainebleau contains 20,000+ climbable boulders. Think about that for a second – 20,000! That means there are boulders everywhere. There are about 5’ish main forests that each have their own boulder collection within the greater Forêt de Fontainebleau (Forest of Fontainebleau). So each and every day you can choose to go to a different area, or a different area within an area.

One of the most famous areas includes the Sea of Sand, which was something marvelous to behold. Sam and Amber had slightly different geologic explanations for how this happened, but the end result is a large desert-looking landscape peppered with boulders and trees. 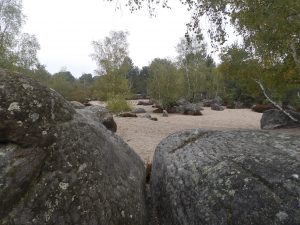 boulders amidst the “Sea of Sand” 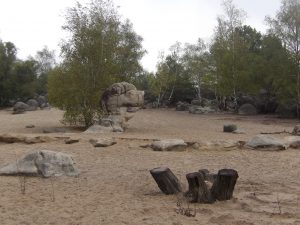 It just so happens that this is a fabulous place for slack-lining, which is also a decent warm-up activity for bouldering. And since we were waiting for the rock to dry, Sam and Amber got out their supplies and we went for it on top of the soft, sandy ground. Just keep in mind, there is a reason we took still shots versus video… 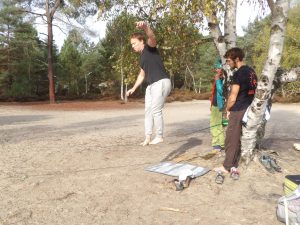 I’m totally going to stay on (sure…) 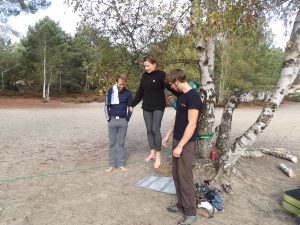 Sam and Amber have a lot of problems (well, not really – they were quite lovely). Well, at least they kept talking about all sorts of problems around the forest. I caught on pretty quickly – ‘problems’ were boulders (or maybe they were specific routes up the boulders, I’m not sure). At first I thought maybe all this talk of problems could be a bit silly or dramatic, but I soon understood. Each and every boulder represents as much of a mental exercise as physical. At each rock, we would discuss the various techniques and ways up the rock (i.e. the ‘solution’) and then we would go for it (usually after Sam or Amber demonstrated).

When we started the forest was relatively empty, but as we walked around it came alive with people of all sizes and ages, from young children to around-80 year old folks. Check out a couple of pictures below; I can just picture the four guys in their 70’s hanging around the same boulder in the 1960’s – just incredible and inspiring! 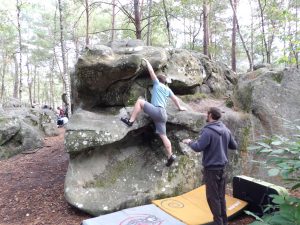 that’s as far as I can stretch 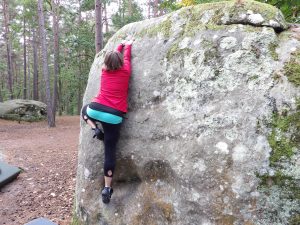 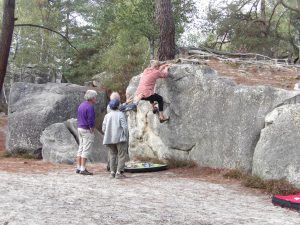 they’ve been doing this since the 60’s 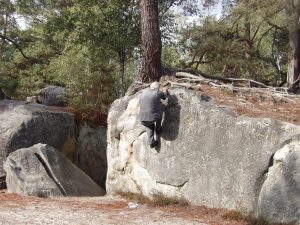 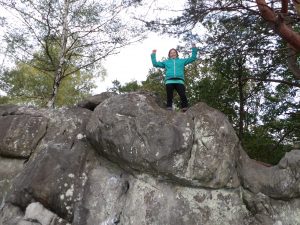 by the end, we felt as though we overcame a lot

This was an all-too-short trip (although our aching muscles would disagree!), but looking back on it I’m so glad we said ‘yes’ to this and that we didn’t succumb to the ‘are we really this kind of people’ mentality. We left extremely exhausted but, at the same time, refreshed and alive. And we can’t wait to get back to Seattle and continue what we started here (I’m looking at you Cale!). What a tremendous experience in Fontainebleau! 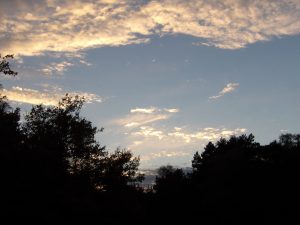 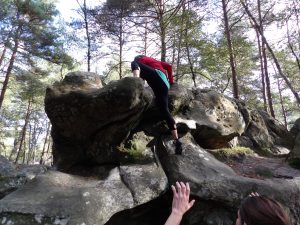 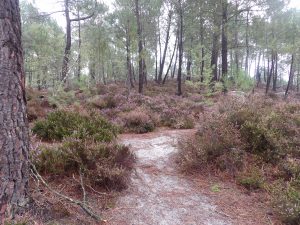 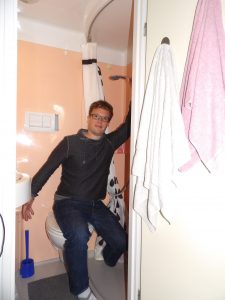