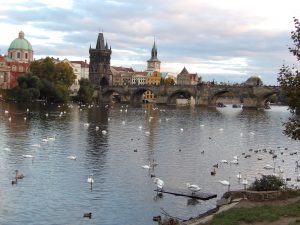 Iconic Charles Bridge in Prague on a beautiful Autumn day

Apologies to all 3 of my readers; in the last few days I’ve suffered my first case of writer’s block on this trip. Why, you ask? Because the last week and a half is a blur, and we’re still trying to figure out what we just experienced! (I do realize there are more than 3 of you…at least 6)

For the majority of our trip we chose to stay in each place longer, thereby decreasing the length and frequency of travel. Due to logistical considerations this last stretch was not at all like that. In fact, in the last week we travelled in almost every possible way – by bus, plane, train, and water taxi! 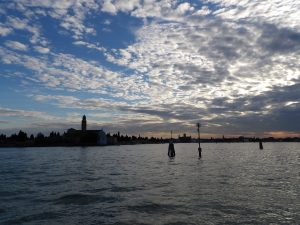 This is not to say that we haven’t seen amazing things; in fact we’ve seen some of the most beautiful cities on our trip to date: Prague, Venice, and Florence. Just to have some fun with it, I’m going to compare three completely incomparable cities on a number of very unscientific factors (with the minor caveat that technically we still have one day left in Florence). 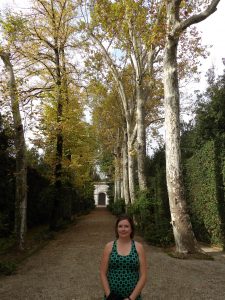 Food and Drink Factor (of course a Joy would start with this)
Winner: Prague
The food in all cities was phenomenal. Prague was like Budapest (very meat-centric) with a few additional veggies on a given plate, although I wouldn’t say that a vegetarian would be comfortable there. Venice and Florence were what you would expect; fresh, delicious Italian food everywhere you turn. In our experience the food is an absolute tie between the three places. 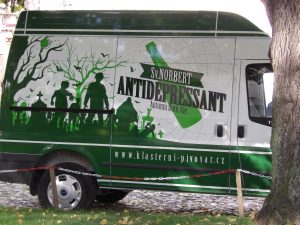 They are serious about their beer in Prague

Prague pulls ahead in the drink portion, which is really comprised of 3 sub-factors; beer, wine, and coffee. Beer in Prague is fresh, delicious, and cheap (more on that in the next section), whereas Italian beer is nothing special. The wine in Italy has lived up to and exceeded expectations, but the Czech wine also impressed (of course I’d still give the edge here to Italy). Coffee houses are everywhere in Prague, and the coffee culture is similar to Budapest (and Seattle).

Drinks go to Prague by virtue of coffee (spoken like a true Seattle-ite), and therefore I’m declaring Prague the ‘Food and Drink’ victor.

I do want to note that our favorite single experience was in Florence at La Ménagère, a French-inspired ‘new concept restaurant’ that involved an amazing meal followed by live jazz in the club downstairs with some unique mixed drinks. I don’t quite know what the ‘new concept’ was, except there was a florist in the middle of the restaurant which was interesting – and yes Terra loved the flowers! (The picture below is not from that restaurant but from another great Florence spot.) 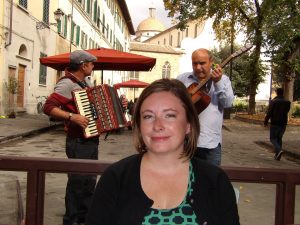 a couple of buskers working hard for a tip!

Expense Factor
Winner: Prague
This one is not even close. It’s like comparing the Silicon Valley with Spokane. Cities like Venice and Florence are known for being very expensive, and they have lived up to the billing (pun intended). The food, drink, and lodging in Prague is all much much less expensive than Venice. Prague prices were similar, although maybe a bit higher, than Budapest prices. 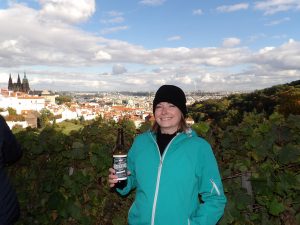 As an aside, to date we’ve spent around a month in Central Europe (Czech Republic, Hungary, and Croatia). I’ve read in a guidebook that some places like Prague are starting to rival its Western European counterparts in expense, but we haven’t found this to be true at all. In fact, from what I can tell you could travel Central Europe for half the price of some Western European countries. The scenery is amazing, the wine is good, and the history is a fascinating blend of ancient and very recent. It’s a different experience to talk to people who were actually affected by Communism and lived through the Soviet bloc’s demise. We are excited to spend much more time in Central (and Eastern) Europe in the future. 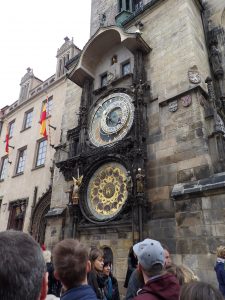 The Astronomical Clock – probably the most famous site in Prague

Gondola Factor
Winner: Venice
This one is a bit unfair…
The gondola ride was extra-awesome because we actually got a singer, which we understand is rare these days. In the old days Venice didn’t have all of the nifty bridges it currently has, and so it was meant to be traversed by boat so the most beautiful parts are on the water. By taking a gondola (and later a water taxi down the Grand Canal) we were able to see Venice in that light – it was awesome! 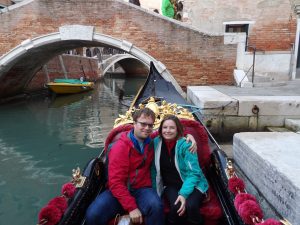 Prague and Florence (and every other city in the world) – no gondolas.

Cultural Immersion Factor
Winner: Incomplete
One thing we have enjoyed on this adventure is learning so much about the culture of the individual cities, and we have largely accomplished that by joining free walking tours. It was the same thing in these cities (with the exception of Florence as I didn’t find one well-recommended); in fact in Prague we took 3 different walking tours in two days! (Side note: 5 hours of walking tours in one day is too much) 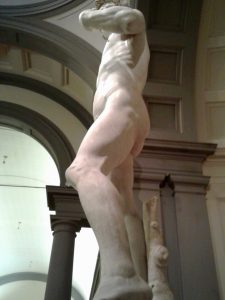 Probably the single most amazing piece of artwork that we’ve seen is Michelangelo’s David, with such awe-inspiring detail in such a massive figure (for example the detailed veins that run up his hand, arm, and neck). And even more impressive when you understand the history of how it all came together (read this really fascinating piece for the story).

The reality is that 2 full days and 3 nights is nowhere near enough time to truly understand the history of any given city. So I’m giving this an ‘incomplete’ grade.

As I mentioned above, however, Central (and Eastern) European history fascinates us, and we now realize that we know all-too-little about the significant and very recent (in a historical sense) upheaval and change that has occurred in this area of the world. It was amazing to learn about the Velvet Revolution in Prague while standing in Wenceslas Square picturing hundreds of thousands of people jingling their keys in an act of non-violent defiance that led to a completely peaceful transition from Communism.  It was shocking to learn about something so momentous that happened during our lifetime that we’d barely even heard of. (queue ‘Winds of Change’ by The Scorpions)

I think it’s been especially poignant with the re-emergence of the Soviets onto the world stage with the rise of Putin. People in Central Europe have been caught between Western and Eastern powers for much of their lives, and it seems like their perspectives are shaped by both. One thing is clear; in our conversations with people throughout Europe there is still a lot of skepticism about the United States involvement in the world, as well as complete flabbergasted-ness by the current state of our democracy. People are watching the debates more closely than we are, and I think we can all universally agree that is a scary thing. 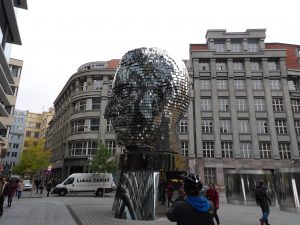 very…Kafkaesque (there are a lot of Kafka statues, which is interesting because he was completely unknown here while alive)

Twitchiness Factor
Winner: Venice
If any sort of natural disaster occurred in Venice, there would seriously be a stampede in the streets. It is currently supposed to be the ‘off season’, and it’s anything but. Tourists outnumber the ants here (look it up on Wikipedia…no, not really).

‘Twitchiness’ is our word for how I look when I get extremely flustered and overwhelmed, and I was definitely twitchy in Venice. It was so exhausting to be around that many people all the time, around every corner. 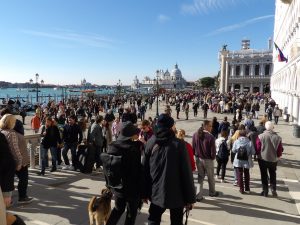 This was a quiet street in Venice

Florence was a second runner up and not far behind Venice. The particular challenge in Florence is the extremely narrow sidewalks combined with numerous legions of motorbikes and tourists. It’s total insanity.

Even though we’ve been all throughout Europe, this is the first time that we’ve felt crushed by the tourists. Don’t let anyone fool you into thinking that mid-late October isn’t extremely busy in Italy. I’m declaring Venice a ‘winner’ here but since this is a negative factor it’s actually the loser.

Overall Experience Factor
Winner: Venice
Despite the negatives that I outlined above, Venice was a unique and memorable experience that we simply will never forget. We stayed in Lido, an island close to Venice, and took the ferry over to Venice each morning. We took a ferry to Murano Island to see the famous glasswork. We got lost in the streets (very difficult not to do). As I mentioned above, we took a gondola ride, which was truly a once-in-a-lifetime experience. And we had beautiful sunny days that culminated with gorgeous sunsets. 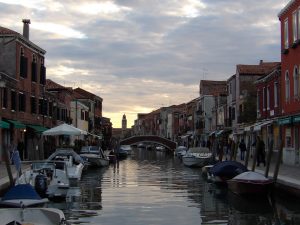 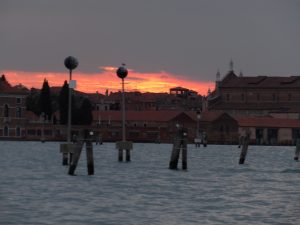 Prague and Florence are both remarkable cities in their own right, but if I had to choose one city to see in the entire world it would probably be Venice. 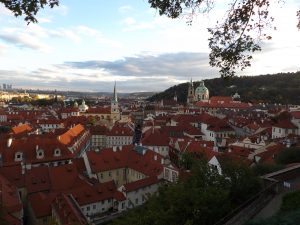 What’s really remarkable about Venice is that it is truly dying. It’s on the leading edge when it comes to feeling the effects of global warming as sea levels continue to rise. In fact, once a month during the full moon Venetians (and some unfortunate tourists) have to all put on their boots, place waterproof barriers in front of their doors, and walk on a series of benches to deal with a high-tide that can get all the way up to your waist! This is destroying the foundation of the buildings slowly, and although they have a 50+ billion dollar (or Euro) solution in the works, it’s been massively delayed by government corruption (embezzling, amongst other things).

In addition to that, our tour guide made a point to tell us that fly-by tourism is really killing Venice, and specifically the large cruise ships that come through daily. According to her, waves from these behemoth boats impact the foundations of the city that were created hundreds of years ago as the tourists flood off in droves, snap a few selfies, grab a latte, and then leave. This does very little for the city except increase stress on every aspect of the structures and life in the city.

I think it’s obvious that what is happening in Venice is a precursor of things to come in other places in the world. It’s terribly discouraging to see the lack of forward thought and initiative in doing everything we can to combat climate change. Those who know me characterize me as an optimist, but I’m having a difficult time seeing the silver lining on this one. When will our politicians realize that we need to take action that looks 20, 50, 100 years down the road instead of to the next election (or, conversely, when will we elect people who do)? Rant over (and with full realization that the first thing I should do is look at my own choices as I don’t always make the most planet-friendly ones).

We are off to Cinque Terre for a few days and then on to a week-long Tuscan cooking class!  More blogging soon! 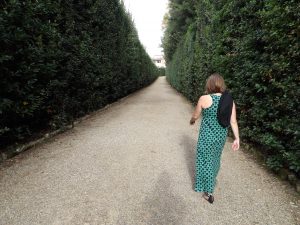 on to more adventures! 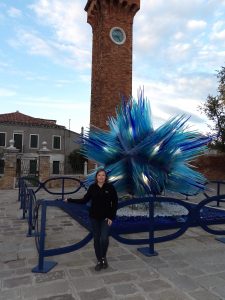 a glass piece of art in Murano 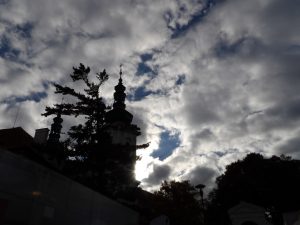 One of Prague’s many spires against the clouds 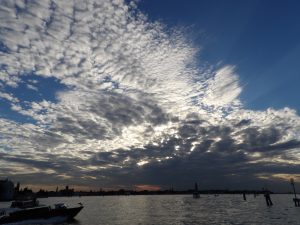