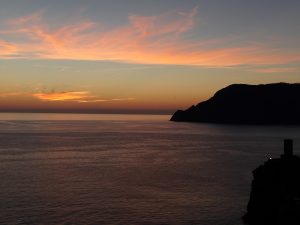 As a child, there was really only one movie (which happened to be a trilogy) which really captured my imagination.

Star Trek? No way (sorry Trekkies)
Karate Kid? Not for me; I basically failed out of karate after one practice
Star Wars? A little too heavy-handed on the good vs. evil theme
E.T.? Too weird and scary

The clear winner in my mind is the Indiana Jones trilogy. It has humor, intrigue, just enough but not too much romance, adventure, maps (I never pass up a good map), and a healthy dose of stretching history and archaeology. Even today I could easily sit down for ‘The Raiders of the Lost Ark’ and actually enjoy it despite the age (both the film’s and mine). My condolences to ‘The Goonies’ which would also qualify but doesn’t serve this post’s purpose. By the way I’d love to hear what your go to movie or trilogy was back in the day!

If I haven’t lost you already with my dismissal of a few classics (sorry Omar, I know you are a Trekkie), then you are probably still wondering what on Earth Indiana Jones could have with our trip to Cinque Terre in Italy. I’ll let you be the judge; our trip featured a ‘chase’ through a train, snakes (you’ll remember that Indy HATED snakes), romantic vistas, trails closed to mudslide, and multiple forms of travel across a crazy map. Think I can sign on to the next installation when Harrison Ford is deemed to old to jump around? Well…read on and let me know what you think! 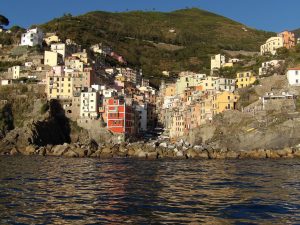 the picturesque town of Riomaggiore

Part 1: Caught between two cars and a bathroom

I stood there, frozen, acutely aware of my own stench – caught between two cars of the train like a wayward satellite on the outskirts of Earth’s orbit. Can’t they see that I’m trying to do the right thing? I was beginning to wonder if my own premature whistle-blowing might lead to our demise.

You see, I had purchased tickets from Pisa to La Spezia, the gateway to Cinque Terre, with the expectation that we would have to transfer in La Spezia and take another train to Montorosso – not an easy task given the beast of a suitcase I was carrying along with our other items. But upon embarking, I learned that the train stopped right in our little town of Montarosso, about 15 minutes beyond La Spezia. Oh, the relief when I discovered we wouldn’t have to transfer again!!

I paused a moment to determine whether I should ‘chance it’ by not paying. Of course, there is getting caught and then there is doing the right thing. Which is why I went to find a train employee and see if I could pay for the extra ride. I found him and he told me to “wait over there” pointing to the area next to the toilets between the cars, which is where you found me at the beginning of this story.

Nano-seconds turn to seconds; seconds to minutes, and I start wondering if he was actually coming at all, or if it was code for ‘you don’t really have to worry about it but I need to pretend to do my job’. I turn around to go back to my car, only to realize that I can’t figure out how to get through the door. It turned out to not be my smartest moment, but in my defense every train door in Europe works a bit differently.

In any case, I finally piggy-backed through the door on someone coming out of the bathroom, made it back to my seat, and was just going to wait to spot him again, but never did. We were past La Spezia, on the way to Montorosso (so technically in the ‘no ticket’ zone), and starting to gather our stuff together when I saw the train employee out of the corner of my eye entering the car on the far end. But it wasn’t the train employee I had talked to (who knew I was legitimately trying to pay), and it was a much more surly looking dude that didn’t know who I was. Let’s call him #2. 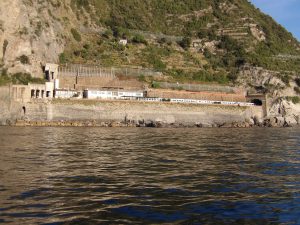 view of the train, where the slowest chase in history played out

Part 2: The Slowest Train Chase of All Time

At this point #2 the slowest ‘train chase’ of all time commenced, as #2 was slowly, methodically dispatching customers one at a time while working his way down the aisle towards us, while we were…standing still. I couldn’t get to him and explain our situation because people were starting to get up and I couldn’t get around them, not to mention that the stop itself was so soon that we probably would have missed getting off. So we decided to hold our ground and hope that the train stopped before he got to us. And, gloriously, it did! Of course I would have preferred to pay the exact appropriate amount, but I left feeling like we made every effort to pay the additional amount (which between the two of us would have amounted to less than 10 euros).

How’s that story on the Indiana Joy(s) scale? Okay, I admit it’s probably a 1/10 and won’t get me the next installation unless it’s a spoof in “The Man Who Knew Too Little” style. (which speaking of, if replacing Harrison Ford doesn’t work out too well, maybe Bill Murray?)

Now that I’ve completely over-dramatized what was a very minor event, let’s get on to the business discussing Cinque Terre and what there is to do there. 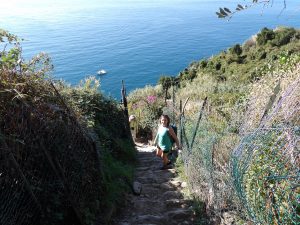 So what is Cinque Terre?

Cinque Terre literally means ‘5 lands’, and those 5 towns which sit on the Northwestern Italian coastline are (from South to North), Riomaggiore, Manarola, Corniglia, Vernazza and Monterosso. This area forms a national park, and all of these towns (except Monterosso) don’t allow cars in the main part of the town – except that I still managed to almost get run over by a golf cart-like vehicle twice. The national park has tons of trails, and the most popular trails travel along a very dramatic coastline. The hills are dotted with vineyards and beautiful flora, and the views are so stunning that I took 300 pictures in one day. The best part is that you can travel between the cities by foot, boat, train, or a combination of the three options. For example, this is what we did on our first day: 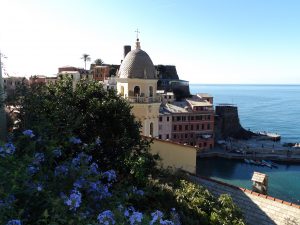 our view upon arriving at Vernazza 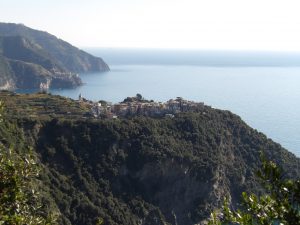 the middle town, Corniglia, in the distance

As long as you have 16 euros for a daily hiking/train pass, every day is a ‘choose your own adventure’, and can involve anything as chill as soaking up the sun on the beach and getting some gelato or as intense as hiking 20 miles through pristine coastline and countryside (and still getting plenty of gelato). This place combines my love for hiking with Terra’s love for cute little towns like none other. What an amazing spot!

That’s right, I did promise you more plot to prove to you that this was an Indiana Jones-like adventure. We didn’t exactly get dropped into a room full of snakes like Indy did. There was a pretty gnarly snake that we spotted zigging and zagging it’s way up a vertical wall. We were on guard the rest of the time, making sure that we didn’t allow a sudden scare to cause us to fall off the side of the cliff that we were traversing.

Oh yes, the mudslide. Well, the mudslide actually occurred almost exactly 5 years ago. You can read about it here. There are still portions of the coastline trail that are closed due to the crazy storm that hit all those years ago.

We were fortunate that we didn’t have that kind of weather; in fact, it was sunny and in the low 70’s every single day we were here. And since we have officially hit the end of the tourist season, we had a lot of places almost all to ourselves (although on Saturday there were quite a few tourist buses that appeared). The last two nights we found our favorite restaurant near Vernazza that, in our humble opinion, had the best view for sunset in all of Cinque Terre. Afterwards we utilized my headlamp to walk down uneven steps and carried another tourist’s baby carriage. Do you think Indiana Jones could have managed that? 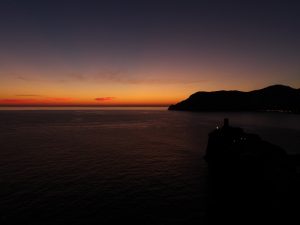 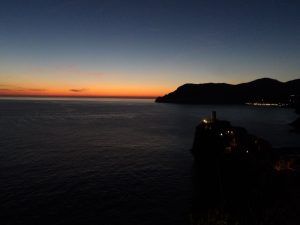 If you are still not convinced, there was a cat playing dead, treacherous stairs to climb up and down – and, get this, our faces almost melted off due to the heat (inside ‘Indy’ joke). 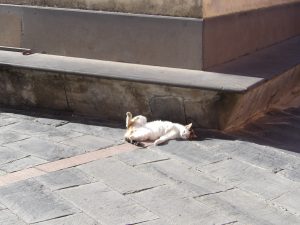 Indiana Joy? Again, I’ll let you be the judge. But did Indy ever have to deal with hieroglyphics like this? 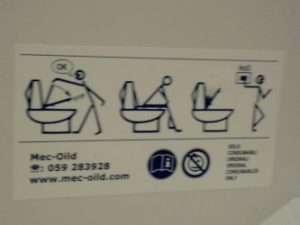 For our next adventure we will be enjoying a week-long cooking class ‘Under the Tuscan Sun’, and then our culminating European adventure will take us to the Andalusia region of Spain. Enjoy the pictures below; more blogging to come! 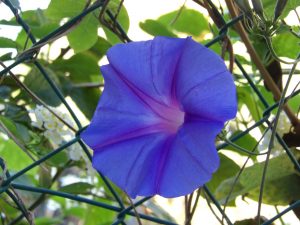 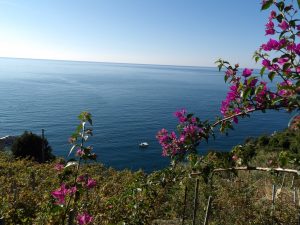 again with the flowers 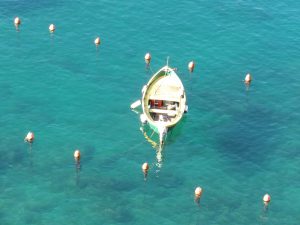 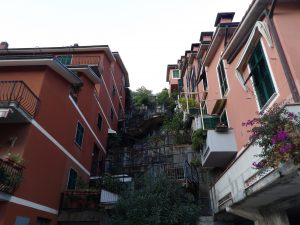 we walked up a lot of steps to get to our place! 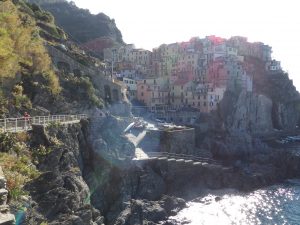 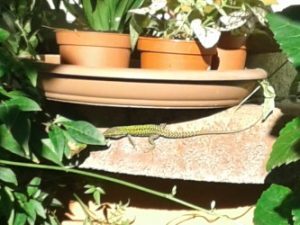 our friend at our apartment 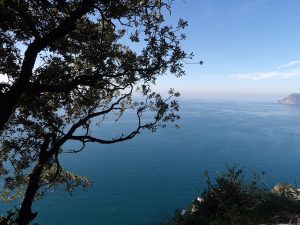 great day for a hike! 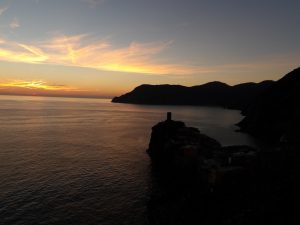